My favorite number is 11, and it has been since the 1990s but today, if I can be honest, eleven is weirding me out.

I had a mini crisis in my mind before I started writing this.  I was trying to put a metal shelving unit together without the instructions because the movers disassembled it to move it, and I fucking lost those directions back in 2014.  I spent 30 to 45 minutes searching for how to put together a metal shelf, had the model number, etc. and even watched two videos on it but I gave up after fifteen minutes cause I just couldn’t focus on the shelves, cause I was focused on the 11 other things I have to do today.

I start all these little projects at home and I swear I’ve finished sixty-five percent of them, but the other thirty five percent are left undone, in the middle of, leaning up against the wall and lying on the floor of my guest room and it just jabs me in the annoyed and frustrated part of the brain when I remember that I have to get back to them.

But why the fuck am I stressing about decorating my apartment while making the most efficient use of my time?

That’s just how my brain works.  It needs things to think of and tasks to do, and it needs to visualize how to do them, work on them, and then complete the task almost like a computer program.

I hate that today made me feel weird, and just like those unfinished projects, this new job is something that I don’t want to do, but I know I have to do it.  Otherwise there will be shelf, no dresser, no chair to sit on or no money to afford this apartment that keeps challenging me each day.

I’m going to somehow get through this adjustment period, because I know that’s all it is.  I wrote this to help me NOT feel weird anymore, however I might feel weird again along the way and starting and finishing this blog actually made me feel a hundred percent better about my life even though I’m weirded out about the other thirty five.

I thought about something really profound today.  I want to tell you so bad, but I can’t really put it into words. It’s like being happy and sad, regretfully proud and believing in the most truth based conspiracy theory ever.

I’ve felt like that a lot the last few months, especially when I was living in four different parts of the United States since June.  I drove 1100 miles in 21 hours, and I know that doesn’t sound very impressive, but almost six of those hours I spent waiting at Goodyear for my car to get four new tires.  Then less than thirty days later, I drove another 3200 miles by myself cross country and paid for almost everything with cash.

Fact.  I have not worked a real bonafide job since May 13th, and if I can be ultra candid, those last two weeks at my bar job I barely even “worked.”   I went to smoke a cigarette during a shift around 8:30pm and I never came back.  Who the fuck do I think I am?

Apparently, I’m someone who defies the rules of conventional thinking and bridges the gap between the brain cells and stars in my mind, and that reminds me of a song I’ve been listening to for a week.  this galaxy in my mind

Sometimes it becomes even more difficult than normal for me to understand what I know and even more of a debacle to explain it to anyone.  And I don’t know why, but I’m drifting away from you.

I’ve been kind of a baller lately, and by that I mean I cried like a bitch in May, June, and July.  In some ways I was a baller cause I made enough money to finance this $5000 move back home but it other ways I teared up when I saw the sunrise while crossing the border from California to Arizona.  Here’s the proof 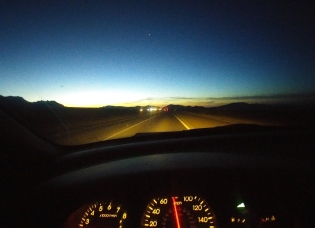 I know what you’re thinking….he can’t possibly cry and drive a car while taking a picture of the sun coming up, but you’re wrong because as I found out, I am able to do a lot of different things at once, even though I recently lost my wallet in my apartment tonight for a few hours.

I swear to God I don’t know what I’m going to do with 1150 square feet of space but the good news is the walls are starting to come alive with the memories I’ve made in the past and those are the things that will inspire me in the future.

I’m numb from blocking out the pain, drenched from the tears I’ve been holding in since somewhere outside of Phoenix. and I need money so bad that I took the first and only job that I was offered,  even though a part of me loathes the fact that I have to.

My friends and family tell me it’s the logical choice, and that sometimes you have to do things you don’t want to do, and whatever other euphemisms that apply to my situation that they can throw my way. I do appreciate it, and I am listening with one ear, but right now all I can hear is blah, blah, blah.

This Blog has seen: